Serge Valentin gave this one 86 points, and he's almost always right. Did he nail this one too?

It's a blend of Hampden (whooo!) and Monymusk rums from Jamaica, probably with an average age under 10 years. And sadly, like most rums, it's chill-filtered and 80 proof, which is just so ridiculous and unnecessary. Why not at least 92 proof and NCF? Why is rum so far behind the times? If people want dilute whisky, they can add water, but damn it, give me a chance to drink it raw. Let the clods and lowlives have their mixers..

Anyway, the nose is so promising: lots of grassy funk, with the signature Hampden style coming through, with vanilla icing and cake. And it tastes just like that: basically a like fresh cupcake that was rolled around in a barnyard.

Though the proof is low, it's got solid heft and doesn't doesn't take too watery. But like almost every 80 proofer, it lacks that second gear that can take it from good to great.

83 pts/B-. Not quite as enamored as Serge, but this is rock-solid rum for $30. Lest I sound like a broken record, at cask strength, this would be way better. But it's nice enough, as is. 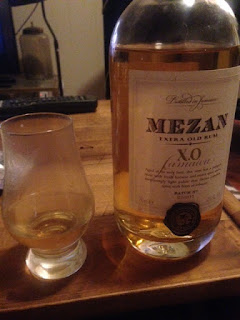 Posted by BarrelChar at 9:20 PM