Calvados often has a funky, pseudo-vomit/sour milk note on the nose, and this one is no different. If I were more diplomatic, I might call it "earthy", but it's more like "wet dog". There's a bit of cider spice too, but it's playing second banana (pardon the mixed fruit metaphor).

Anyway, I totally dig it. Eventually, you get bored with the same old whiskey noses (spice/oak/peat/whatever), so a vaguely rotting sour-cream note like this is a nice change of pace. But for the more tepid palates, they'll probably need to acquire a love for it, or be brainwashed into thinking it tastes good by experienced snobs like me.

On the palate, there is the obvious apple upfront, but it's a spice & funk affair, with quite a bit of pepper too on the finish, which isn't dilute, despite the low proof.

It's very good. At cask strength, this could be spectacular (that's the mantra around here, isn't it?). As is, it's a lot of fun and a good, if expensive, intro to Calvados.

B/85 pts. Nice stuff, but the funk is George Clinton/Afrika Bambaataa levels, so beginners might recoil. 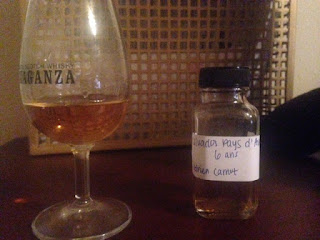 Posted by BarrelChar at 9:08 PM